I’ve joined a number of virtual running organizations since starting my 50 state journey two years ago, but my favorite is the 50sub4 Marathon Club. After running The Chicago Marathon in 2015, Jim and I decided that it would be ‘fun’ to try and run a marathon in every state. I did an internet search of running groups that catered to this goal and decided that I wanted the extra challenge of running all my marathons in less than four hours. It took a year to get in the minimum of ten races needed to register, and Jim and I had our first opportunity to meet club members in person at the Maui Oceanfront Marathon in January.

As is typically true with all runners that I meet, I had a really nice time getting to know some of the folks in this club a little better. The acting president, Bob, is a 70 year old man who at the time, was three states shy of his 50sub4 goal. He missed it by about nine minutes in Hawaii and mentioned to us that he was going to put on a series of races in the coming year to better his chances of besting his times. The first in his lineup was a marathon starting in Sundance Wyoming and ending in Spearfish, South Dakota.
I have been so excited about this particular race ever since he made the official announcement. It is extremely similar to the Leading Ladies Marathon that I ran a year ago, which is still the most beautiful course I have run to date. I loved visiting the Black Hills in 2016 and was very excited to return to the area. Running a very small race with lots of friendly people was also very appealing. I left Saint Louis expecting to have a fabulous weekend and was not disappointed in the slightest.

I flew into Rapid City a day early so that I had time to do some sightseeing. After a very brief stop to the famed Wall Drug, I spent my morning in the Badlands National Park. The scenery was absolutely gorgeous. I love rock formations, and this place was right up my alley. I was able to take some little walks over some breathtaking cliffs, but I do wish I’d had more time to do a proper hike.

I drove over to Spearfish in the afternoon and picked up my packet at a local Brewery. This is a thousand times nicer than dealing with an expo and also gave me a chance to have dinner with about a third of the other runners. Bob capped the entries for this marathon at 52 participants, so it was the smallest marathon I have run yet. We met at the park on Saturday morning and caravanned to the starting line. (The roads were too treacherous at the top for a bus. Also, there was only 50 of us, so a bus might have been excessive.) I rode up with a gentleman from Kansas City and two really nice ladies from Western Wyoming.

One thing that I hadn’t really accounted for was how cold it was going to be in the mountains. It was 93 degrees when I left Saint Louis, and I didn’t pack properly for my trip. I was thankful to have had a pair of capri pants for the race, and the long sleeve shirt that I planned to toss once I warmed up stayed on for the entire marathon. It was a ‘good cold,’ however: Not so cold as to be miserable, but cool enough that I never got hot running. It was foggy/ cloudy all morning with some spitting rain at times. Again, nothing terrible, but being wet and cold is a slightly more unpleasant feeling. 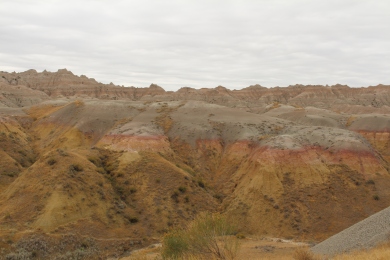 More pictures from the Badlands, not the course. 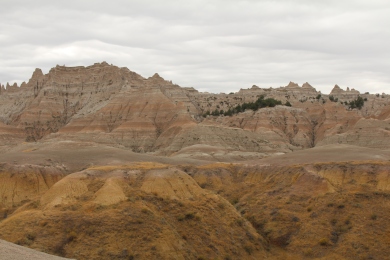 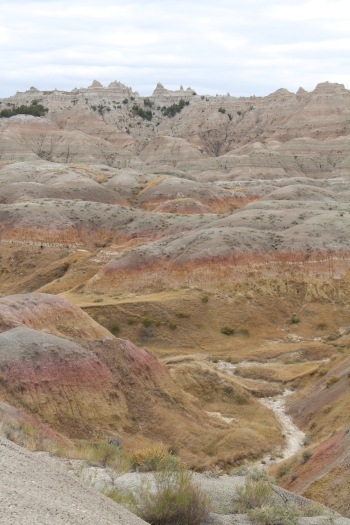 As mentioned before, this race was super- small. The course support was well thought out but very minimal. There was one bathroom at the start line that we all had to rotate through; that held us up for about ten minutes. Water stops were about two miles apart with Gatorade at every other station. Some were unmanned, but all of the drinks had been pre- poured for us. My biggest concern was that there were no bathroom facilities anywhere on the course.

There were only seventeen girls running the marathon, and one other woman who had submitted an estimated time of completion that was similar to mine. It was her first marathon, so I had no idea how fast she was going to be. It was my intention to try and stick with her for the bulk of the race, however. When the race began, she took off FAST. I couldn’t see her after mile two or three, so I contented myself with the promise of a solid second place finish and a possible PR. Since the race is almost entirely downhill, I was fairly certain I’d run a fast time.

After leaving the lookout point where we started the race, we only ran three of our twenty six miles in Wyoming. The terrain is mainly woods and cattle ground in this area, and I did have to stop and walk over a number of cattle grates on the road. I slowed down during the uphill at mile two, but aside from that, I had no problem clipping along at a 7:40 pace for the first half of the marathon. The terrain slowly changed as we got into South Dakota and turned onto Highway 90, and we got to enjoy the beautiful rock formations that the Black Hills is famous for. Any time the race began to feel difficult, looking around at the amazing scenery reminded me how lucky I was to be able to travel to these incredible places and do something that I love.

The constant downhill of the course began to wear on me by mile eighteen or so, and I definitely struggled more in the last eight miles. I remembered that the road flattened out at the end of the Leading Ladies race, so I anticipated taking the last couple of miles easy. (I had to stop along the course to go to the bathroom—in the woods—so I wasn’t shooting for a PR anymore.) At mile 24, I caught sight of the woman who had been ahead of me the entire race. She had slowed down to a walk/ jog, and I realized that if I kept my pace up I’d likely be able to overtake her. I caught up to her in the last mile, and she was battling some leg cramping and wasn’t going to be able to run the rest of the course. As much as I hate to see someone else in discomfort, I was super- excited to be the first girl in and claim my first ‘win’ in a race.

It was too cold to really enjoy the after party, but Bob organized a nice spread of sandwiches, snacks, and beer. I got a bobblehead runner trophy for being first in my age group, and silver marathon necklace in lieu of a medal (with additional charms for being a sub4 and BQ finisher.) This was such a fantastic race in every respect, and it’s one that I hope stays around for another few years so that Jim gets a chance to participate as well.

** Race Highlights: This is my very favorite course to date. I also loved running with so many 50sub4 Marathon Club members.

** The Downside: This was a small race, so there weren’t any bathroom facilities on the course. I had to poop in the woods during mile seventeen. It was the absolute worst, and it cost me a PR. (Though to be fair, any bathroom stop would have cost me the PR.)

Overall Place Within My Gender: 1/17