The Race: Louisville puts on a damn good marathon.  The city has a nice, walkable downtown with lots to do and many hotels within a few blocks of the start line.  The expo was a good size, packet pickup went smoothly, and the pre- race pasta dinner was better than average.  The race itself had roughly 10,000 half marathoners and 2,000 marathoners.  There is nothing at all to complain about in terms of organization or communication.  Well, done, Louisville.

What made this race really stand out was the course.  City marathons are really cool, because you get to see a new downtown, but they can also get rather boring fast.  Especially if there isn’t massive crowd support like in Boston, Chicago, or New York.  While being a city marathon, this race managed to stay interesting for the better part of 26 miles.  The first several miles took runners on a nice tour of the downtown, and then we turned into Churchill Downs—which is the real highlight of this race.  There were horses warming up on the track above as we ran into the facility, and it was very cool to be in this area the weekend before the Derby.  I also really liked that the marathon and half marathon stayed together until this point (mile 8.5 or so).  It’s nice running with a larger pack of people, and I benefitted from the half marathon’s pacer as there wasn’t one for the 3:30 marathoners.

Once the marathon splits from the half, there is an out and back portion that leads into Iroquois Park.  I loved this because it allowed us to see the lead runners.  The only major elevation gain is in the park, but the uphill miles were honestly a nice change and coming back downhill was great.  As we headed back towards downtown, we got to see the second half of the marathon runners which—again—helped to keep the race interesting.  We met back up with the half marathon around mile 18, and Louisville did a very nice job of allowing the two groups to run next to one another but separated by a rope.  I appreciate the hell out of this as it means I don’t have to weave in and out of walkers.  (Walkers are amazing, and I have a mad amount of respect for them…. I just don’t want to run around them.)

The only difficult portion of race is from mile 21- 25 when the marathon does separate from the half again.  By then, we marathoners were pretty thinned out.  While the neighborhoods were still pretty, running was much harder by now and there just wasn’t much to keep my mind off of that fact.  I’m sure that we lost a lot of crowd support to the rainy conditions as well.  The highlight of this section was an awesome kid at mile 22 who had a shit- ton of energy and was cheering like mad.  He really helped… The last mile through the finish was great; it was raining, but there were still tons of enthusiastic spectators.

My Race: Louisville surprised me.  I was hoping to run a 3:32ish marathon and ended up coming in about four minutes faster than anticipated.  I kept waiting to hit a wall or lose steam, but I never really did.  This was also the first time I’ve run a negative split, which was very encouraging.  I’d heard that this was a fast marathon, but was really surprised by how much I enjoyed this course; the weather also helped out.  It started to sprinkle at mile 7 and then really rain at around mile 9.  While this made the run a bit uncomfortable, it also kept everyone cool.  I’ll take rain to a 75 degree day any time. 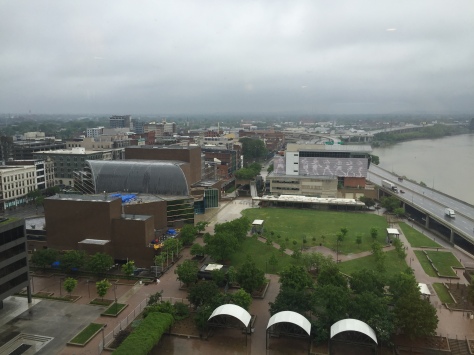 Not- so- sunny Louisville.

Many. many miles ran in this rain….

As with so many of these races, a huge highlight was getting to stop in Jasper, Indiana on the way home and have dinner with our friends.  Traveling around the country to run races really gives us the opportunity to reconnect with people we don’t regularly see, and that is such an added bonus.

** Race Highlights: This was a fast course that stayed interesting for the better part of 26 miles.

** The Downside: Very few negatives.  The aid stations weren’t consistent with water and Gatorade, so it could be difficult to tell what I was grabbing when.  The food at the finish wasn’t super- great either.

Favorite Race Day Song: ‘Just Like a Pill’ by Pink