This marathon was FUN.  I had never been to Baltimore prior to the race, so I really didn’t have any idea what to expect.  The city puts on an outstanding event, however, and I’m very glad that I had the opportunity to check out this course.

I stayed at the Hampton Inn that is directly across from the ballpark, and that turned out to be the perfect place to be.  The start line was literally right outside the hotel, and I was able to watch the runners line up from my window before sauntering down.  (It’s also a short walk from the finishers’ area.)  Because I stayed downtown, I didn’t bother to rent a car as the airport is a short cab/ Uber ride from the city.  (A definite plus.)  The expo was nice, and we got good swag at this race.  Under Armor’s headquarters is in Baltimore, and they provided long- sleeve shirts for the runners.

I had read the reviews for this marathon, and many described the course as ‘challenging.’  I think that this is a fair description as there are a lot of hills in the second half, but it was also very well laid out and I ended up running one of my faster times.  I loved that the race took us through the zoo—and that the staff was out on the course with animals J  We also had a nice run down by the waterfront.  Perhaps my favorite aspect of this race was that the marathon began at 8:00 and the half at 9:45 in a completely different area.  The marathoners ran ten miles then passed the start line for the half.  This was really fantastic as it provided a cheering section of roughly 8,000 people.  We ran out to the Under Armor headquarters and then back alongside the start line.  By the time that I got there, their race was just beginning, so I ran the second half of the marathon with the half runners.  This was actually a perfect setup: instead of running a congested first eight miles or so and then a very lonely second portion of the race, tons of fresh, fast runners joined us at the midway point.  Congestion wasn’t really an issue as the half released in waves and I was always surrounded by people running at my same pace.  The extra runners definitely pushed me and made for a much faster marathon than I had anticipated.

I really enjoyed the neighborhoods and parks that we traveled through during the second leg of the run, and there was a definite uptick in crowd support once the half joined in.  I was very impressed by the number of people who were out to cheer on the runners.  The hills were exhausting by the end, and I *may* have walked up one or two, but none of them felt impossible.  Honestly, the most difficult part of my race was climbing up into the bed of a truck to get a picture with my friend, Nate, who dresses up as a Tiger for this event every year.

Also, I loved my race mix for this marathon.  In honor of getting to visit with some old friends from middle school, high school, and college, I ran to nothing by 90’s songs.  It was a fantastic choice.  Equally fantastic was getting to hang out with said friends during the weekend. 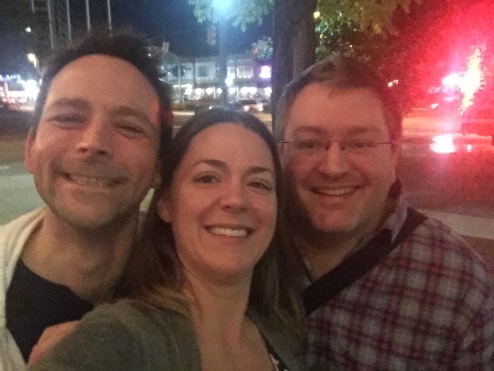 ** Race Highlights: I loved so many things about this race.  My two favorites were that the half marathon began at my 13- mile mark and that I got to see my awesome friend, Nate, dressed up like a giant tiger.

** The Downside: There was one roundabout that had cobblestones which were a little difficult to run on.  I’d love to see the race put down mats for the runners.  (And that is all. This was a perfect race.)

Favorite Race Day Song: “None of Your Business” by Salt N Pepa and “Sell Out” by Reel Big Fish