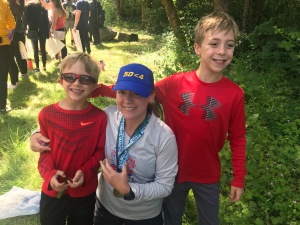 I have heard nothing but positive things about The Flying Pig Marathon, so when looking for a run in Ohio, it seemed like a good choice. (It also helps that Cincinnati on the side of the state that is drivable from Saint Louis.) After looking at the course map—and more specifically, the elevation guide—I was a little confused about this universal praise. Cincinnati isn’t a huge city, so I wasn’t expecting much scenery- wise. Also, that place is hilly as fuck—which came as a surprise. I had expected hills in Atlanta and Baltimore, but The Pig is absolutely no joke when it comes to elevation gain and loss. I don’t think there is 100 meters of flat ground in that entire damn city.

Upon my arrival, I quickly understood the draw: this race is awesome because of the people that get involved. For a mid- sized marathon (3,362 finishers), the expo was huge. Everything was very well- organized, and there were a ton of vendors. It helps that the half marathon and Saturday races draw very large crowds in their own right. The starting corral organization was impeccable. It was the first race in a very long time where I didn’t feel crammed into my corral, and I was in the second of six or seven. There were even porta potties located inside of each, which means that runners don’t have to sprint to the start from the bathroom lines. Pace groups were very visible and well- marked, and the pace group that I used for the majority of the race was spot- on time wise. The aid stations were also exceptional. Again, for a mid- sized marathon I was not expecting 25 fluid stations serving water and Gatorade. (Also, every station had Gatorade first and water second and ANNOUNCED this clearly. THANK YOU, FLYING PIG.) I wasn’t a fan of gel being offered as late in the race as it was—miles 18 and 22, but there were tons of snacks being handed out on the course if you did want to eat. The finisher’s area also left nothing to be desired. The medals were fantastic, there were a ton of people milling around with ‘information’ signs that could answer questions, and they even had piping hot pizza in the food line. All that was missing for me was a Diet Coke.

A great as the race organization was, it was the spectators that truly make The Flying Pig shine. Cincinnati is home to about a quarter of a million people, and the only races where I have seen larger crowds are in Chicago and the second half of the Boston Marathon. Seriously, I think every person living in that town was on the race course, and they were all incredibly enthusiastic and supportive. It really did make the day feel special.

As for the course, Cincinnati is much prettier than I had anticipated, and the marathon does a nice job highlighting this. It’s also a hilly ass place, and the marathon highlights this as well. I was initially pretty worried about how this one would go, but I finished in a pretty average time (for me) and had a relatively pleasant run. The best thing about large uphills are the large downhills that follow. It also helps that once you reach the top of the most grueling portion of the race you are treated to a fantastic view of the city and the river. I would have loved to go back and really take this in.
I’ve only got two criticisms for my time in Ohio: First, the race organizers sprung for very nice, Asics brand race shirts. Then, the put the ugliest design on the front of them. This isn’t a huge deal in the grand scheme of things, but they would have been such nice shirts otherwise. Second, I stayed at the Millennium Hotel, which was in a great location, but whose rooms left something to be desired. I’d definitely go with different lodging if and when I return. 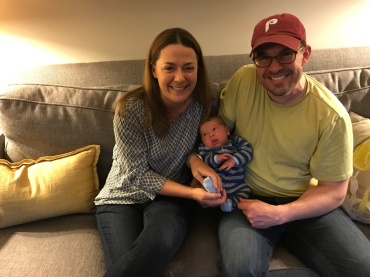 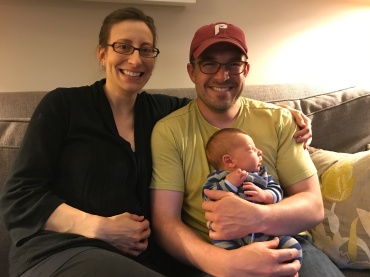 As I mentioned before, I thoroughly enjoyed the people of Cincinnati: those that were volunteering, those who were cheering on the runners, and the super- nice once I chatted with during the race. I also got to hang out with some of our favorite people, Rob and Andrea, and meet their adorable new baby while I was in town.

Also, my Flying Pig Medal was two- sided. That means that I now have a pig butt medal. It doesn’t get better than that. 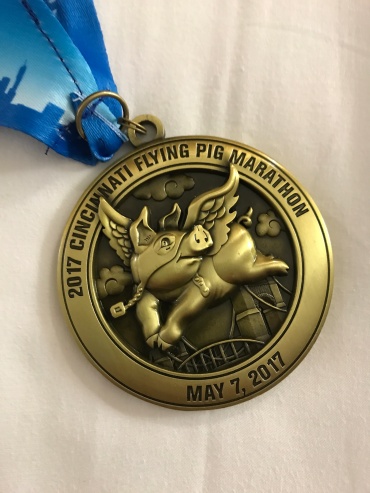 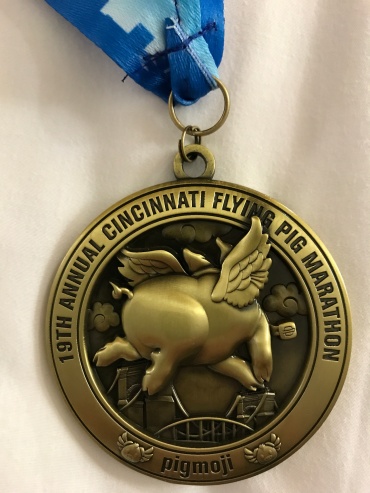 ** Race Highlights: The spectators and volunteers on the course, hands down. A special shout out goes to the guy positioned right in the middle of the largest hill on the course with a megaphone and a large ‘F’ shouting, “Get the F up that hill!” over and over again.

** The Downside: Those fucking hills. Also, I usually don’t care one way or another about the race swag, but the shirts in 2017 were just terrible.

Favorite Race Day Song: I didn’t really have one for this marathon.

Note to future Sadie from present day Sadie: You weren’t sure what to wear for this race. It was 42 degrees when you started and ended in the mid 50’s. You settled on shorts and a tank top. This was the right call.