The Saint George Marathon is reputed to be a fast, downhill course, so my plan going into the race was to attempt a sub 3:25 PR. I’d been ‘practicing’ a faster pace with my previous four marathons—trying to run faster than 7:50 minute miles for as long as possible before having to slow down. I did pretty well with this in Spearfish, so I felt that I had a good shot at a fast time on this run. Saint George would be my twenty second marathon in twenty four months as well as my fifteenth Boston Qualifying race in a row.

Jim and I both participated in this marathon, so we decided to take a long weekend to enjoy some of the national parks in Southern Utah. We flew into Las Vegas on Friday morning and, serendipitously, had the chance to grab lunch with a friend from Jim’s residency program who was also in town. It was a two hour drive to Saint George, and we got to town with just enough time to pick up our packets, have dinner, and turn in for an early night.

Our Saturday began at 3:30 AM in order to catch the busses to the top of the mountain. The race brochure strongly advised arriving at the pickup site before 5:00 AM, so we showed up around 4:30 to an already crowded scene. The bus ride took almost an hour, and there were large bonfires near the start line to keep everyone warm until the 6:45 start time. Unfortunately, the latecomers to the loading process slowed the entire operation down, and the race was delayed fifteen munities to allow the last busses to get to the start. 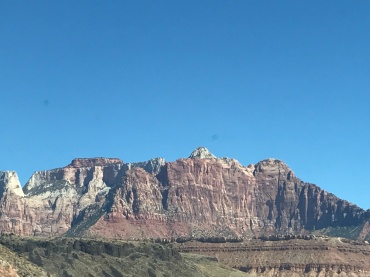 This race was another example of self- seeding done right. With nearly 5,000 runners, the only ‘exclusive’ corral was for the elite and sub- elite runners. (I did have a different color bib, which was supposed to seed me just behind this group, but it ended up not mattering at all.) We all lined up near our pacers on a wide, country road and had the highway to ourselves for the first few miles—much like the Mesa Marathon.

Our 3:25 pacer, Mike, was great. He talked to me when I started conversations and was very encouraging. He also did a nice job of banking some extra time during the first seven miles of the race so that when we hit the uphill section everyone could slow down a bit. My only complaint was that by the last mile of the marathon, Mike had given us nearly a three minute cushion. I don’t want to complain about this too much as my goal of a sub- 3:25 marathon ended in a 3:22:49 time, but it was really hard to keep his pace on some of the last miles of the race. 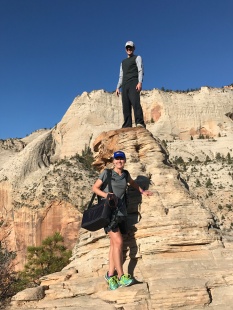 Overall, my Saint George Marathon experience was extremely positive. The course is beautiful, highlighting the famed red rocks in this area. The weather was a little warm, but still comfortable, and the race is also well- supported. As I mentioned before, the first seven miles of the race were an easy downhill, but then we did hit a difficult stretch of uphill climbing from miles seven- eleven. Honestly, the hills weren’t even that steep, but they felt strenuous at the high elevation. I felt like I flew through the back half of this race. Some of the downhills were so steep (and fun!) that the run felt effortless. The last couple of miles got tough as the course flattened out through town and the temperature got hotter, but I didn’t fall off of my pace too badly. I had no idea that I could run this fast at the marathon distance, and I am excited to try for another sub- 3:25 race in the future.
After wrapping up, Jim and I headed to Zion National Park for a couple days of hiking. We did Angel’s Landing the day after the race—which was definitely Jim’s idea—and The Narrows on the following morning. As special as the marathon was, the highlight of this trip was the unbelievable beauty of Zion.

** Race Highlights: The course is beautiful and also FAST. I dropped almost three minuets off my previous PR on a day when I wasn’t feeling 100%. I loved that the majority of the downhill section was in the second half of the course.

** The Downside: Miles 7-11 were an uphill slog at elevation and were HARD. There was another large hill at the start of mile 18 that was also rather unpleasant.