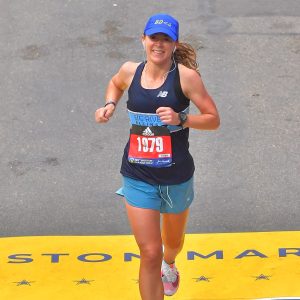 My aunt and uncle live in Steamboat Springs, Colorado, so it has always been my intention to make the city’s June marathon our CO race. It was a great opportunity to meet up with my dad, brother, and sister-in-law and take advantage of some local summer activities. Jim and I took the kids whitewater rafting, we spent a day at the summer activity park on the base of the ski mountain, and we enjoyed a very relaxing afternoon at Old Town Hot Springs after our marathon. 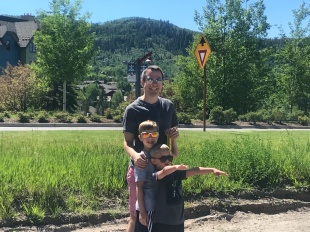 While I have been looking forward to this trip as a way to explore Colorado with the kids and visit with my aunt and uncle, I also realized that the Steamboat Springs Marathon was likely going to be my most challenging race to date. It begins at 8,128 ft above sea level and drops to 6,728 feet. Even though we essentially ran down a mountain, the course was not entirely downhill. While we had a few miles of steep decline—which I personally love—most of our descent was gradual. There were also a lot of rolling or flat sections and a few climbs that felt gargantuan due to the altitude. I’ve been very worried about squeaking out a Boston Qualifying time on this course, so I planned to take full advantage of the downhill portions and hopefully bank enough time that I could slow down on the difficult sections towards the end of the race.

The marathon was point to point with bus pickup to the start running from 5:45- 6:15. One of the benefits of staying with family was getting to sleep in an additional hour and having my aunt and uncle drive Jim and I to the start line. (They even pulled over so that we could use a porta potty on the course and avoid the lines at the beginning of the race.) We hung out in their heated car until it was time to begin the race and were able to avoid freezing at the top of a mountain for an hour. 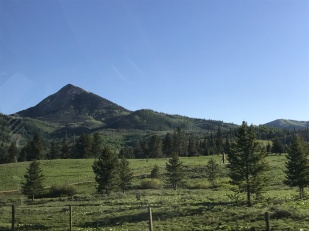 As previously stated, this was a net downhill course, but there were two uphill sections during the first four miles that were challenging due to the high altitude. This race didn’t have a ton of out of state runners, which was evidenced by how many people passed me on these ups. I was able to keep a steady 7:15- 7:30 pace on the early downhill sections which allowed by to slow up considerably when the terrain did change. We enjoyed a steep descent from miles four to six, and then rolled our way down the mountain from there. The road flattened out as we got nearer to town, and we had a large uphill section around mile twenty that was particularly difficult. Fortunately, it was followed by another steep downhill, and while the last two miles through town were technically up again, the grade was very slight.

We planned our trip so that we could get to Steamboat three days before the race which gave Jim and I a chance to do a little running at elevation, and the altitude didn’t bother me as much as I had feared it would on race day. I really only noticed it on the uphill sections or when I tried to run and drink water at the same time. By the halfway point, however, the lack of oxygen was beginning to take a toll. I hit the half marker at 1:42:30, which meant that I should have enough time banked to take it easy during the difficult sections still to come. I ended up needing most of my cushion as the hills in the second half became more and more challenging to climb. (By mile seventeen or so I gave up running up them altogether and essentially Jeff Gallowayed myself through the last ten miles.) I also began to have concerns about oxygen depletion when I started to see colorful lights in my peripheral vision. Fortunately, that didn’t get any worse as I ran and I didn’t pass out on the course.

Perhaps the nicest part of my day was seeing my family at mile twenty. My aunt supplied me with my two favorite on- course amenities: orange slices and ice cubes. This is also the first time Jim or I have ever had ‘fans’ on a course, and it was really an adrenaline boost to see them all smiling and waving. It also gave me something to look forward to during the difficult sections of miles seventeen- twenty.

The last six miles of this course were completed through sheer force of will… and a lot of walking during the uphills… The temperatures climbed into the high sixties which was uncomfortable on a sunny day. The steep decline into the town of Steamboat Springs really saved my race: it allowed me to pick up some speed and pass a few people, and as I didn’t want to get passed back again, I kept my pace up to the finish. Running through downtown was a nice ending to this race, and the finish area was a perfect place to meet up with my family. 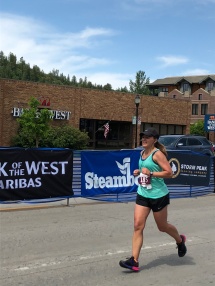 The scenery along this entire course was lovely: the views of the surrounding mountains and valleys, farmland, and Yampa River made for a picturesque morning. If the race had been less strenuous, I would have taken more time to enjoy all of these things; however, I was impressed by my surroundings every time a managed to pick my head up and look around. Another highlight was the adorable half mile kids’ run that took place after the majority of the marathoners crossed the finish line. The little people had the opportunity to cross the ‘big finish line’ which I think made the day extra special for them.
I ended up with a 3:38 finish time, which is about eight minutes slower than my average. However, I was still able to beat my Boston Qualifying standard and was the fifth girl and third person not from Colorado to cross the finish line. 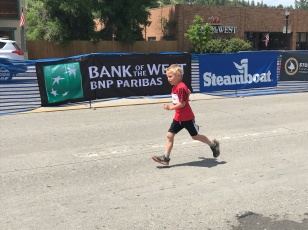 Race Highlights: The fast downhill at the beginning of the race and seeing my family on the course.

The Downside: There were some TOUGH uphills at this high elevation.

Open from The Greatest Showman