I’ve mentioned in this Blog before that there are states where I don’t care what marathon I run, and there are others where I’m 100% set on a particular race. Tennessee was one of these states. I have heard that Memphis puts on a top- notch event, so I wanted to be sure that Jim and I worked the Saint Jude Marathon into our schedule. And now that it’s finished, I can say that I loved almost everything about this race.

The one, very large, drawback was the weather: It was rainy and in the 60’s on race morning, which made for a muggy, humid situation. The race directors pushed all events back an hour on account of the storms, so we didn’t begin our marathon until 9:00. This further added to the problems with heat. The rain did taper off before we began the race, but it was so unbelievably humid that it was a real struggle to complete this. (Jim almost took a DNF.) For all that I loved about Saint Jude, this was one of the most difficult races I’ve participated in. I’d love to re- run it on a cooler, drier day… 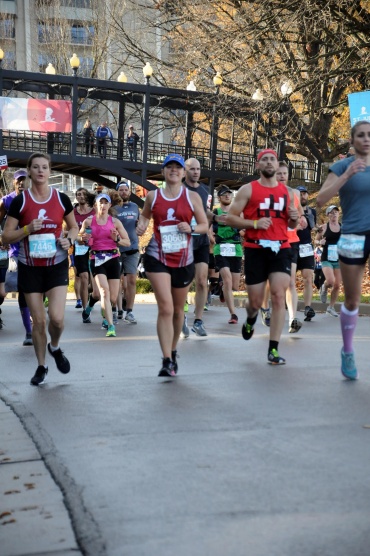 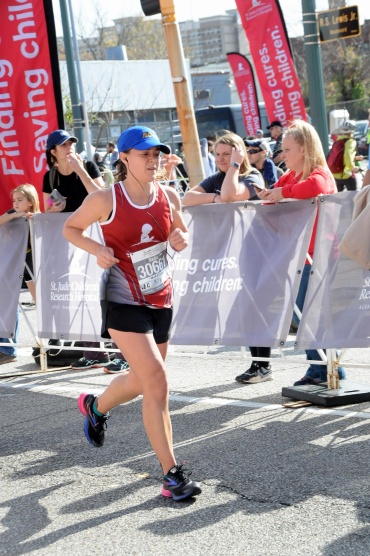 Memphis is an easy drive south from Saint Louis, and we ran into a ton of Missouri folks at the expo—including some from Kirkwood. Our hotel was right next to the finish line and a short walk to the start, which was very nice as this is a large event and parking could very well have been a problem. Our room overlooked the start line for the 5k and 10k, which made for good spectating.

The course around Memphis was nice: it was hilly in places, but nothing too terrible. We ran through downtown, through some neighborhoods, along the Mississippi—pretty standard stuff. I honestly remember very little about the physical route; what I really paid attention to were the people. There were SO MANY spectators out supporting runners on this course, and so many of them were Saint Jude families; which was both heartbreaking and terribly inspiring. We ran through the hospital campus around mile three, where patients, staff, and families lined the street. I got pretty choked up, which was bad, as crying during a marathon is a nasty combination.

I registered for this race as a Saint Jude Hero, so I wore a designated fundraising singlet. I couldn’t get over the number of people who very sincerely thanked me, by name, for supporting the hospital. The course also included ‘corridors’ of enormous posters of before and after shots of patients. Again, it was impossible to run through these without getting very emotional, so I finally had to just look down.

The amazing spectators and awesome course support were 100% responsible for me finishing this race because, as I stated above, it was fucking difficult. My saving grace were all of the people who set up beer or mimosa stations along the route. After mile 10 or so, I stopped at every one to ask for ice cubes. I’m very sure this is what allowed me to finish under my 3:40 goal time.

The after party for this race took place in a minor league baseball stadium, which was pretty cool. It also meant that we had a walk around the entire. damn. stadium. To get our post- race food. But God bless Memphis for offering pizza and diet soda. It would have been a lot of fun to lounge on the infield and relax for a while, but I was so sore and miserable after this run that I was happy to hobble the half mile back to my room for a nap. Jim and I spent the evening with (another) friend from residency, which capped off the trip. 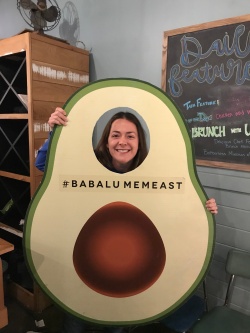 The Memphis Marathon also marks the end of my five marathons in 60 days streak. I had reservations about being able to pull off Boston Qualifying times on races stacked so closely together, but I managed to gut it out. My body is incredibly sore, however, and very ready for a much needed six weeks off. I’m glad to know that I CAN run races this close together, but I have no real desire to do it again.

The Downside: The humidity was really, really terrible

Favorite Race Day Song: I feel like it has to be “Walking in Memphis”