I chose this little marathon on Sauvie Island—just outside of Portland—because it advertised a flat course and cooler temperatures for a July race. I figured that it would also be a nice tune- up for Juneau in late July. I would have loved to run Revel Mt. Hood after my success at Mt. Charleston in April, but I didn’t think my body would take kindly to another downhill run, and I also wanted a course that would more closely mimic the terrain in Alaska, which is next on the calendar.

The Sauvie Island Marathon is run on July 4th, which happened to be a Thursday this year. Jim had to work the holiday weekend, so I took the boys to Oregon with me and met up with Jim’s aunt and uncle. They were awesome traveling companions: they watched the boys while I ran, drove us around all week, and happily went along with whatever we wanted to do. We stayed in Portland from Wednesday- Saturday morning, so this included snagging some new Junior Ranger badges at Fort Vancouver National Historic Site and spending a day hiking around Multnomah and Bridal Veil Falls. 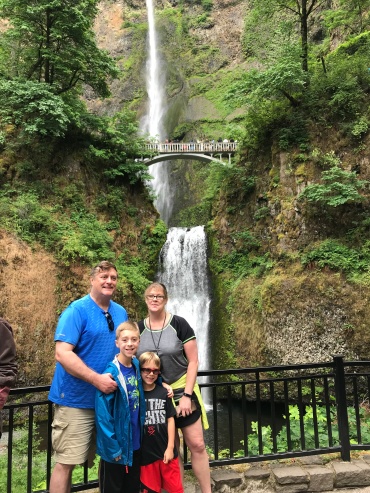 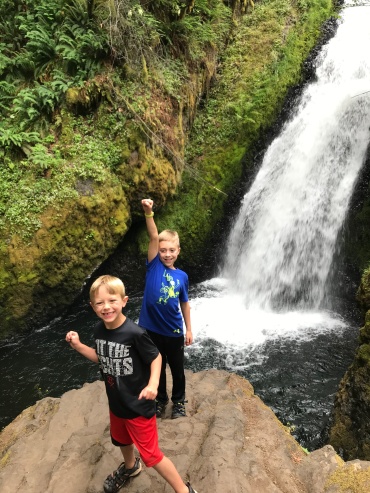 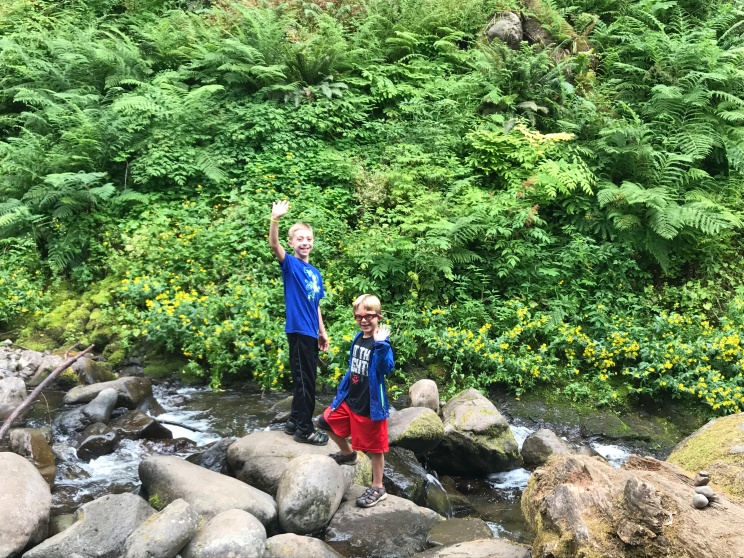 First off, Portland is an awesome city. I had a blast when I visited last summer with friends, and I had a great time with family this go- round. We stayed at the Silver Cloud NW Portland, which was the host hotel. It was nice and had shuttle busses running to and from the race all morning. However, since I opted to drive myself, I realized after the fact that we easily could have stayed someplace more centrally located. Our neighborhood did have a ton of fabulous restaurants that were within easy walking distance and was about as close to Sauvie Island as I could get. Back to the food: Every place that we ate on this trip was great. Kudos, Portland, on just the right combination of healthy & sustainable vs buttery comfort food.

This marathon advertised running through a “pastoral paradise” with views of farms and the Columbia River. It also claimed to be the flattest course in the state. What I realized upon entering the island was that I had essentially flown to Oregon to run a Midwest race. The island was lovely, and we did have views of the verdant hills and cliffs on the mainland. However, we essentially ran through farmland through the bulk of the morning. The race started at 6:30, so I drove in just as the sun was rising and the mist was lifting off the fields. (Watching cows emerge from said mist was somewhat eerie and had a very Stephen King vibe….) The race started and ended at a pumpkin patch that reminded me very much of Eckert’s in Illinois or any number of U- pick farms in Michigan.

The half marathon course is a 13- mile loop around a section of the island; the marathon includes a 6.5 out and back section along Sauvie Island Road. Our first 3.5 miles were along the half marathon loop, and this section was very flat and extremely comfortable due to the cool morning temperatures. The out and back did have rolling hills throughout, but none of them were strenuous. (It was actually very nice to have some variety in the terrain.) We also transitioned from farmland to views of the river while on this road. This made for a nice change of scenery, though we did have a slight headwind during the first leg. I was able to keep my pace under 8:00 up until mile 16, which put me with the top five females.

There wasn’t a ton of shade on the course, and we had a sunny day. As the temperatures started to rise, I began slowing down. My final ten miles were all between 8:00 and 8:30 minutes. We turned back onto the half marathon route with 9 ½ miles left in the race. It felt good to have the course flatten back out, but we also began overtaking the walkers and joggers whose race had begun at 7:00. There were a lot of walkers in this race—which is completely fine—but many of them were chatting 2 or 3 across which made them hard to pass. Weaving in and out of people is preferable to running alone, though.
During this last stretch, two of the women in front of me began to struggle, and I moved up to 3rd place. (The marathon had less than 250 participants, and with the long out and back for the marathon and a shorter one later in the race, it was easy to see where people stacked up.) Even though I had slowed down some, I was feeling pretty good about my run. That is, until a 19- year old flew past me at mile 24 😉 (But good for her! She was hauling ass and deserved to beat me. Plus, she’s half my age.) I ended up finishing 4th overall which re- solidifies the fact that 2019 is the year of 4th place finishes.

All in all, I was happy with this marathon. The course wasn’t as scenic as I am sure some other Oregon races are, but the island was pretty and I never felt bored. This was a small race, but I always had people somewhat close to me, and it definitely felt more crowded once we met up with the half. The volunteers were all super friendly, and I really liked how many aid stations were stocked with gel (and strawberries!) There were 13 of these total, which is an adequate number. It was sunny and humid by the end of the race, though, and I really could have benefitted from one or two more water stops in our last 6 miles. Post- race food included strawberry shortcake (which went with the theme) and hot dogs. This was fine, but not really my preferred finish food. I really have no other complaints as this was a nicely- run, small race.

Favorite Race Day Song: “Welcome to the Rock” from Come from Away